How to use manufacturing robots with no programming training

Interested in using manufacturing robots but don’t have people with the right expertise on your team?

Wondering if you will need to invest heavily in training your staff on robotics programming? Or maybe you considered surrendering your application to an external integrator?

If these questions sound familiar, then you’ve most likely wondered whether it is possible to program a robot without extra training. 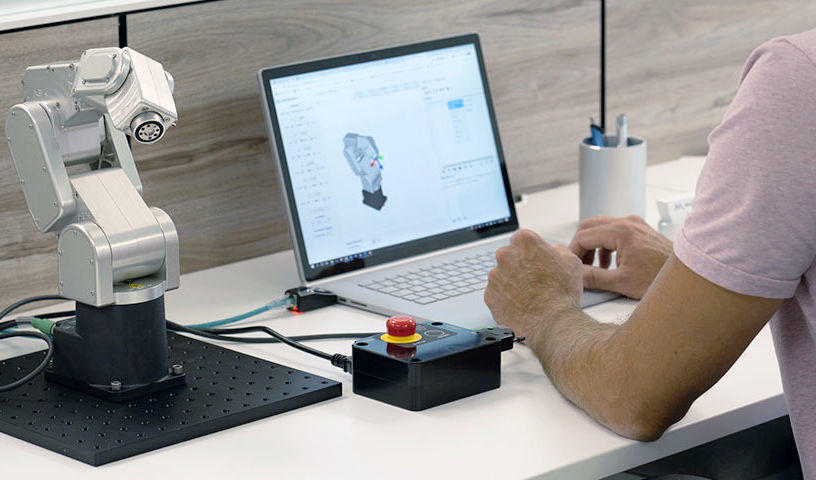 Robotics programming has always been highly specialized. Technicians and engineers typically learned to program particular robot brands and often stuck with that brand for years. Even if you had extensive robotics experience with a particular brand, you had to go through expensive training just to learn the basics of another brand.

This high barrier to entry created a norm to use robot integrators in manufacturing. For a long time, these talented specialists have helped manufacturers get their robots up and running.

But, what if you don't want to use an integrator and want your own team to deploy the robot? If you already have a team of competent people who are keen to take on the challenge but don't have specific robotics training, it doesn’t make sense to spend time and money on training them to use a proprietary programming language.

What to do when your team lacks robotics expertise

It's hard to find people with the right robotics experience. For the last few years, there has been a growing skills shortage in the industry. The market is competitive, with fewer and fewer job candidates who have specific robot programming skills. Even big multinational companies — which offer perks that many of us can't beat — are finding it difficult to fill robotics positions.

The vast majority of industrial robots are locked into their proprietary programming languages and software environments. This makes it harder to find suitable candidates who have programming experience with the particular brands you want to use.

For many manufacturers, it may seem like there are only two options:

If neither of these options meet your needs, it might seem like robots are unsuitable for your situation. However, there is another option.

Our industrial robots do not require specific programming skills

Manufacturing robots aren't out of your reach. You just haven't found the right type of robot yet.

What if you could deploy your robot using the programming languages your team is already familiar with? A small number of robots can be programmed with whichever method most suits you. These robots can be quickly and easily added to your business without having to change anything.

Unlike traditional industrial robots, these new robots can be programmed directly and controlled from your PLC or PC. They don't require any programming training and can be easily adapted to suit the needs of your team.

This opens up a lot more flexibility than traditional industrial robots. Since you aren't tied to a particular robot brand and programming language, you can pick the robots that suit the needs of your task.
What are these new robots?

Manufacturing robots you can use… without new robotics programming skills

It might sound like a strange thing to say, but unlike other industrial robots, Mecademic robots aren't really "programmed."

Usually, industrial robots require that you develop a program on their teach pendant, which is a tedious process. Or, you can program the robot offline using the manufacturer's proprietary language and then upload the program to the robot's controller for it to run. If you want to make any non-minor changes to the program, you can only do so by going through the same arduous process.

By contrast, Mecademic robots don't require you to store the program on their embedded controller at all (although it is possible to store some macros if you want to). Your program can run on whichever machine you usually use to control your automation.

Plus, you can control a Mecademic robot using whichever programming method you most prefer.

Basically, you control the robot just as you would any other automation component (e.g. an electric gripper).

Instead of tying you into one programming method and requiring extensive training, you have the option of using any modern programming language — you just send the special Mecademic motion commands over your choice of communication interface (either TCP/IP, EtherCAT, or Ethernet/IP).

The robot will adapt to your programming needs, instead of requiring you to adapt to the needs of the robot, as is usually the case.

Here are four typical ways of controlling a Mecademic robot:

Some cobots are also easy to use but...

If you are looking for an easy-to-use robot, you might already have considered collaborative robots (cobots). After all, many cobots are also designed to be intuitive – you can program them via a simple user interface or even via hand-guiding.

The problem with cobots is that they don’t tend to “play nicely” with other components. Their simple programming options work well when the robot is a stand-alone component. But, when you need to use them with other equipment, it’s very common for integrators to bypass their intuitive interface and program them in a similar manner to Mecademic robots.

Most importantly, with cobots, you always sacrifice performance. They are several times less precise and slower than small industrial robots.

We want robots that are easy to program and still have high precision. Mecademic robots are precise down to 5 micrometers, as you can see in this video.

How to get started with easy-to-use robots

Want to get started with a robot that makes programming easy instead of hard?

Here are 3 quick steps you can take: